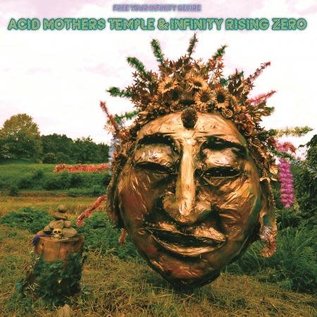 A split album between Acid Mothers Temple & Infinity Rising Zero and Perhaps. Each group has contributed one song, each being a side long in length. This album marks the debut of Acid Mothers Temple & Infinity Rising Zero, a new member of the AMT family. This iteration features Kawabata Makoto, Higashi Hiroshi, and Satoshima Nani. It also includes frequent AMT collaborator Pika, drummer and vocalist of Afrirampo. Nani took on the responsibility of writing the music, with Pika taking on the lyrical content. The album also marks the return of Perhaps, a collective of wayward souls broughttogether by cosmiche beats and motorik rhythms. Little is known about Perhaps , but we do know that the project came into existence at the hands of Jim Haney at the Berklee College of Music in 2012. This is not the first time these two bands have collaborated; in 2014 Perhaps and Acid Mothers Temple completed a North American tour together, playing more than 30 shows in just over a month. Previous Perhaps releases have featured current and former members of AMT, with a number of those releases coming on on Riot Season Records. Edition of 350 copies.