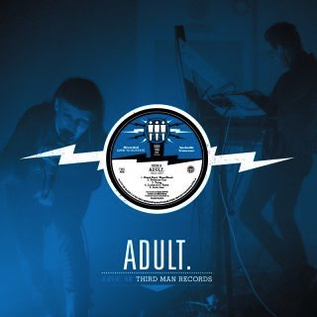 ADULT. have been stalwarts of national independent music for almost two decades, releasing their perfectionist hybrid of darkwave and synth-pop with respected labels Thrill Jockey, Kill Rock Stars, Ghostly International and, most recently, Mute. The soundscapes this Detroit duo sculpts by synthesizer stabs and sparse drum machine rhythm are icy, dense and precise.

This release showcases the group in rare form, complete with the totally unexpected and kind of jarring sound of raucous audience laughter in place of typical applause as the intro as well as a light audible fuzz created by the third member of the group that night, their fog machine ;) Best of all, two of the tracks, Misshaped and Does the Body Know?, make their premiere on this release. ADULT. have outlasted any number of micro-electronic music scenes with whom they could have been grouped and, with their live show down to a science, prove that they will be worth a damn for a long time coming.

A1 Blank Eyed, Nose Bleed
A2 Pressure Suit
A3 Today
A4 Inclined To Vomit
A5 Love Lies
B1 Misshaped
B2 Hand To Phone
B3 Does The Body Know?
B4 Plagued By Fear
B5 Turn Your Back