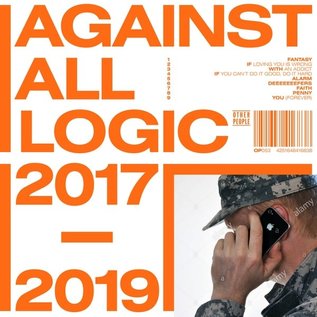 Under his Against All Logic alias, Nicolas Jaar writes music that sounds like it's trying to break out of itself. Textures undulate and basses overwhelm, while vocals flutter in and out of focus as if someone were flicking through channels on a decrepit television. The project's first LP, quietly released on his Other People label at the beginning of 2018, folded half a decade's work into one of the most accessible albums of his career. Now that A.A.L. is a known quantity, Jaar returns with 2017-2019, trading the warmer house music of his debut for a warped techno counterpart . . . 2017-2019 has been rendered more purposefully than its predecessor, each track flowing into the next. It presents an identity for Against All Logic that transcends the previous mid-tempo crowd-pleasers, one that's unafraid to draw from various club subgenres while injecting Jaar's customary washed-out tape atmospheres. The harsh spirals of noise and pneumatic hi-hats of 'Deeeeeeefers' sound like they're pulled from a revised Justice cut or Thomas Bangalter edit, while 'Penny' makes the case that 'lo-fi house' might not be dead after all. The most exhilarating moment on the album appears courtesy of its sole feature, Lydia Lunch, whose voice and philosophy Jaar borrows for 'If You Can't Do It Good, Do It Hard.' A longtime advocate of her work?he reissued her 1990 spoken-word piece Conspiracy of Women (C.O.W.) after layering clips from the recording into his live show for years-- Jaar recontextualizes the no-wave icon's uncompromising ferocity using brash distortion loops that make Yeezus sound tame by comparison." Noah Yoo at Pitchfork (7.9/10)

"Techno influences echo through later on in the project, but to a different extent. The track 'Penny' mixes the tuneful sounds of lo-fi house with a heavy thumping beat that appears halfway through. The closer 'You (Forever)' brings a serene, meditative ending, the album's only real moment of calm, which seems to hark back to 2011's debut Space Is Only Noise (CCS 055-2LP). Jaar shows signs of evolving here, and it's more than welcome. For a record that feels chaotic at times, everything falls into place." -- Joe Hale at Clash Music