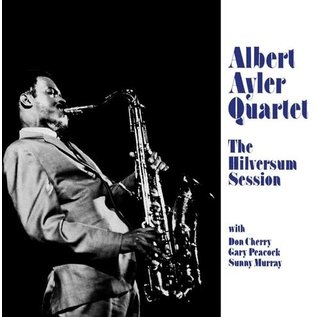 Reissue, originally released in 1980. Our Swimmer presents the first official vinyl reissue of The Hilversum Session in over thirty years. Licensed from Hat Hut. Jazz iconoclast Albert Ayler took the experimental leanings of contemporaries like John Coltrane and Ornette Coleman as a starting point and then blasted them to stratospheric extremes, creating some of the most polarizing and brilliant music of the 20th Century. In particular, 1964 was a pivotal -- and well documented -- year in the free jazz artist's career. After returning to New York, Ayler assembled a brilliant group with Sunny Murray on drums and Gary Peacock on bass, recording Spiritual Unity (ESPDISK 1002CD/LP), Ayler's first record for the legendary ESP-Disk' label, that summer. Soon after that session, Ayler took his trio to Europe where they were joined by cornetist Don Cherry for a tour of The Netherlands, Sweden, and Denmark. The Hilversum Session is a live radio session recorded on November 9th, 1964. At that point the quartet was months into its European tour and the interplay is extraordinary. On classic Ayler compositions like "Spirits" and "Ghosts" the band absolutely rip, with a kind of intuition and connectivity rarely heard, creating some of the most untethered and undeniably powerful music in the history of free jazz.