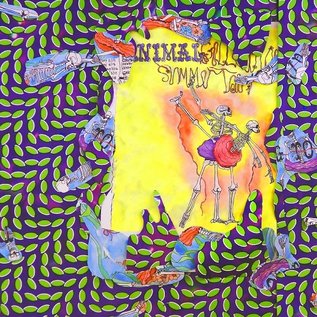 Animal Collective proudly announces live album Ballet Slippers, released in honor of the 10-year anniversary of their modern classic, Merriweather Post Pavilion. Recorded in the midst of the band’s extensive and acclaimed nine-month tour in ‘09, the album features Merriweather’s greatest hits alongside favorites from Strawberry Jam, Sung Tongs, Feels, and Danse Manatee. The release is culled from several shows from that album’s North American tour and sequenced to reflect a full concert experience, complete with song transitions and interludes, creating a captivating document of the genre-defying group.
Reflecting on the decade since Merriweather’s release, Animal Collective had this to say:
“It’s impossible for us to remember the years around Merriweather Post Pavilion without thinking about the live experience. As the record turns 10, there has been a lot of talk about the album itself, but so much of the time living with those songs was spent on stage together.
Every night on tour, the music opened up again, leaving us new spaces to fi ll and new opportunities to rethink our past. Just as Merriweather documents the era in one of its forms, we wanted Ballet Slippers to do the same for some of its other forms.”
Animal Collective consists of musicians Avey Tare (David Portner), Panda Bear (Noah Lennox), Deakin (Josh Dibb), and Geologist (Brian Weitz) who play in various configurations on each album. Hence, ‘Collective.’ Their expansive catalog spans the entirety of the 2000s, including Strawberry Jam, Feels, and Sung Tongs. With the release of Merriweather Post Pavilion, named after the Baltimore venue, they established themselves as one of the most acclaimed acts of the 21st century.