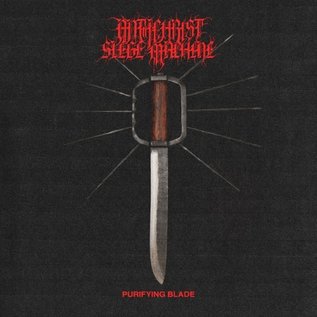 Antichrist Siege Machine was formed in 2016 as an alliance between RZ and SB. Through extensive touring along the east coast and multiple releases, the band has solidified their place as a violent force to be reckoned with. Each effort has further developed the duo’s sound, enhancing the barbarity of previous releases.
The storm now approaches. Antichrist Siege Machine are prepared to release their new full length album Purifying Blade. Sustaining the unhinged violence on display on 2020’s Filth Of The World EP, they rise victorious in the temple assaulted. Each track on here is a weapon wielded by wickedness and hatred directed at the heart of Christendom. Faces of black evil, shields hardened with the cracked ribs of the dead.
• Intense and brutal extreme metal
• For fans of Revenge, Diocletian, Black Witchery, Blasphemy, Conqueror etc.