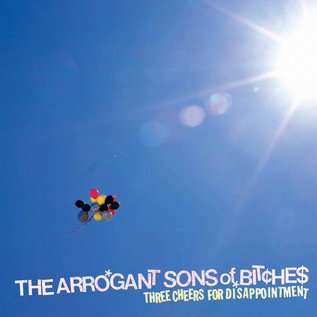 We've been biding our time, waiting for the great ska come back so we could really capitalize on this release, and HERE WE ARE!!! WE'VE MADE IT!!!

After nearly ten years of being out of print, here's a re-issue of the final release from Jeff Rosenstock's first band, Long Island's punk/ska mainstays the Arrogant Sons of Bitches featuring glockenspiels, theremins, a full-blown concept and many more decidedly non-punk/ska things.

This album took about four years to write, record and release in 2006 and that frustrating process eventually ended the band.

After being sought after for years and fetching high prices on record auction sites, it is now available for a not high price! Get it now and satisfy all your nth-wave ska/punk needs!!!!

A1 The Last Bell I Will Ever Hear
A2 (I Must Be A Proctologist Because…) All I Do Is Deal W/ Assholes
A3 So Let's Go! Nowhere
A4 Kill The President
A5 People Pops & Fudgesicles For The Shit Factory
A7 Rocketrocketrocketship
A8 1-800-ALARM-ME
B1 I've Got Enemies In High Places
B2 Disappointment At The Taco Bell
B3 Piss Off
B4 Have Fun Rotting By Yourself
B5 "Yeah, I Don't Know What It's Like To Be Around A Bunch Of Hipsters"
B6 Last On My List.