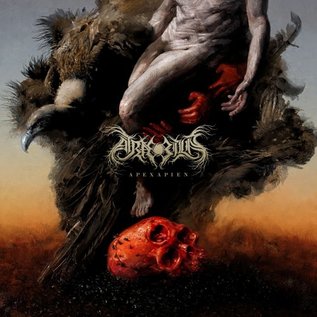 Canada has long been a wellspring from which fierce technical brutality has continuously flowed. In that tradition Atræ Bilis offer the imminent predatory attack of Apexapien, their debut full length offering and one poised to set them on a path of unfettered exploration and intensity.
Like many bands on the 20 Buck Spin roster, Atræ Bilis take elements of several metallic sub-genres and twist them together into a distinctive alloy greater then sum of its parts. On Apexapien, angular blackened dissonance, exhilarating experimental progressivism and crushing guttural savagery merge into a cacophony of violently discordant death metal; all held together with a strict focus, discipline and astonishing percussive momentum.
Thoroughly modern in scope and mercilessly severe in execution, the heinous battering inflicted here establishes Atræ Bilis at the vanguard of a new breed of forward looking death metal bands not content to simply pay tribute to or completely abandon the genre’s towering progenitors.
“…an engaging and charismatic band whose enthusiasm for risk-taking in their songwriting is only matched by their success in execution.” – Invisible Oranges