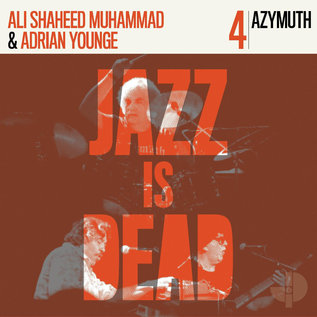 Marcos Valle’s career started with the end of bossa nova. A lifelong surfer of swells, he expertly rode out the final wave of the waning international fad, landing in the U.S. for a short stay before returning to Brazil to continue his career. A proud Carioca (Rio de Janeiro resident), Valle couldn’t stay away from his beloved hometown. This seminal artist is no stranger to Los Angeles, though. Back in the mid-to- late sixties he recorded a solo album (Samba ‘68) and was a featured member of an early, short-lived line-up with Sergio Mendes right before he landed the Brasil ‘66 deal with A&M records. He would try his luck in the U.S. again a decade later, spending a half-dozen years here, mostly in L.A. where he befriended members of Chicago and developed a prolific songwriting partnership with R&B journeyman Leon Ware. Valle never recorded his own music during those years, though. This historic collaboration with Jazz Is Dead’s Ali Shaheed Muhammad and Adrian Younge marks the first time he has recorded music in the U.S. in nearly 50 years. Younge and Shaheed Muhammad started by mining Valle’s back catalog for direction and inspiration. Unlike a number of artists of his stature, Valle is still actively recording and releasing music, but Marcos Valle JID003 is different from all of his others. If spontaneity and improvisation are trademarks of jazz music, then this album stands out in the maestro’s lengthy discography as the closest thing to a jazz album. Valle impressed Shaheed Muhammad with his professionalism and confidence in this new environment with limited time to capture the music: “Marcos is so focused on getting it right, he sat down in the moment and wrote some lyrics about what was actually happening, and that’s how free and open he is.”