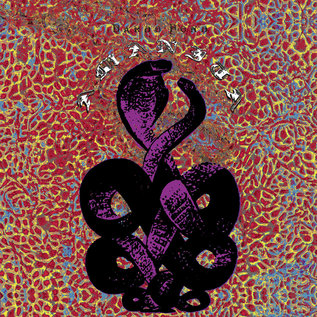 Formed in 1991, the Philadelphia-based quintet have spent some thirty years mapping guitar music’s outer limits – dialing into extremes of noise, chaos, and harmony in free-form compositions that now unfurl across 12 full-length records and a near-limitless body of EPs, cassettes, and CD-Rs Record-ed by the lineup of John Gibbons (guitar), Michael Gibbons (guitar), Isobel Sollenberger (voice, flute), Clint Takeda (bass), and Joe Culver (drums), Ama-nita is the place where the band’s spontaneous collective creativity blazed into maturity.

“Amanita was a manifesto of everything we were trying to do,” says Michael Gibbons. It was really a template for everything we did later. We were a real unit – just so creative, just making up riffs. There were songs, but they were still rooted in our free-improv base. We had a beauty, but we also had a really strong impulse to be dissonant.

• BACK IN PRINT FOR THE 25 YEAR ANNIVERSARY
• THE FIRST 2021 RELEASE OF MATADOR’S ONGOING ‘REVISIONIST HISTORY’ CATALOG SERIES
• FEATURING NEW ARTWORK AND PRESSED ONTO DEEP PURPLE VINYL, LIMITED TO AN EDITION OF 1,500
• INCLUDES TWO BONUS TRACKS “CLEAN SWEEP” AND “BRAMBLES,” PREVIOUSLY UNRELEASED ON STREAMING SERVICES.
• RARITIES LP AND REPRESSES OF THE REMAINDER OF THE BAND’S MATADOR CATALOG TO BE ANNOUNCED LATER IN 2021