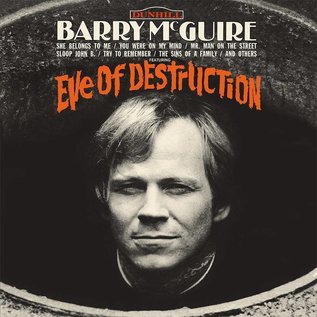 Includes the iconic protest song and title track, which hit #1 on the US Billboard Hot 100 in September 1965. “Eve of Destruction” was recorded by McGuire with the original composer P. F. Sloan on guitar, Phil Spector’s Wrecking Crew members Hal Blaine (Frank Sinatra, The Beach Boys)) on drums, and Larry Knechtel (The Doors, Simon & Garfunkel) on bass. The song would be covered by countless artists (The Turtles, Johnny Thunders, The Pretty Things, Public Enemy), and was also featured on the soundtrack to the film Good Morning Vietnam, among other anti-war movies and TV shows. A dominating hit single, it charted higher than any protest song written by Bob Dylan (McGuire covers two of Dylan’s songs on this album: “She Belongs to Me” and “It’s All Over Now, Baby Blue”).