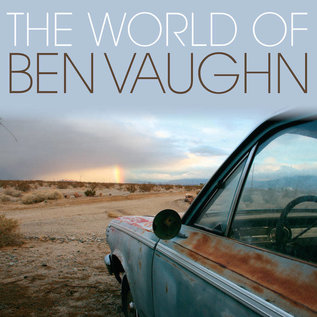 THIS RELEASE IS ONE COPY PER PERSON.
ORDERS FOR MULTIPLE COPIES WILL BE CANCELED.

What do That 70s Show, Ween, Third Rock From the Sun, Alex Chilton, Swingers, Alan Vega, Deer Tick and the first album recorded entirely in a car have in common? One man. Ben Vaughn. Songwriter. Composer. Producer. Recording artist. A man the Village Voice described as having a ‚Äúsound so pure and spontaneous it sounds instantly classic.‚Äù Somewhere in the world right now, Vaughn‚Äôs music is being played. Since 1986, he has been winning fans left and right with his unique take on pop culture. Twelve albums (including the notorious remote recording Rambler 65) and a ten year career in Hollywood has allowed Ben's music to travel to the far reaches of the earth. Be it radio play, sitcoms, TV commercials, or film soundtracks... no one has escaped Ben Vaughn's sound His new release The World Of Ben Vaughn is a one-man band excursion into interesting territories -- rock, country, folk, noir blues and points beyond. Both whimsical and deadly serious, this 11-song collection presents Vaughn in full possession of his talent. If you're not familiar, The World Of Ben Vaughn is a great place to discover a career artist with a beginner's mind. It's definitely a world filled with surprises.