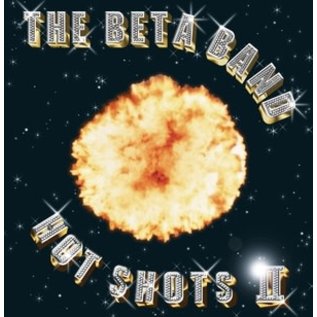 2022 restock. Arguably one of the most acclaimed and loved bands of the past 20 years, by both fans and their musical peers alike, The Beta Band formed in St. Andrews, Scotland, in 1996. Innovative and singular, their unique musical and aesthetic approach to everything they did set them far apart from their musical contemporaries. Together for a relatively short period of time, the three albums and three EPs they released between 1996 and 2004 would nonetheless help define them as one of the most exciting and cherished bands of their generation. After a short hiatus the band gradually gravitated back into the studio and recruited noted UK producer Colin Emmanuel, aka C-Swing, to oversee the process of Hot Shots II which was released in mid-2001. Notoriously the band had intended to release "Squares", which featured a sample from the Günter Kallmann Choir's 1970 version of Wallace Collection's "Daydream", as the lead single. However, after filming the music video and taking the single to radio it suddenly transpired that another single "Daydream In Blue" by I Monster featuring the sample from Günter Kallmann Choir recording was also to be released at the same time causing the band to release "Broke" instead. Touring extensively and supporting Radiohead in August 2002, they made No. 3 on Q magazine's list of "50 Bands to See Before You Die". Standard double-LP version includes CD; gatefold sleeve with printed inner-sleeves.

- A reissue of The Beta Band's Hot Shots II, originally released in 2001.
- After a short hiatus the beloved Scotland band gravitated back into the studio and recruited noted UK producer Colin Emmanuel, aka C-Swing, to oversee the process of Hot Shots II which was released in mid-2001.
- CD version comes in a three-panel digisleeve with a 12-page poster booklet.
- Standard double-LP version (BEC 5543701) includes CD; gatefold sleeve with printed inner-sleeves.
- Limited edition color double-LP version (BEC 5543810) includes CD; Comes in gatefold sleeve; One golden vinyl and one silver vinyl, both with printed inner-sleeves; Edition of 1000.