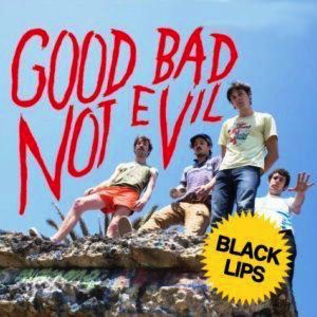 Good Bad Not Evil was produced by Black Lips at The Living Room studios in their hometown of Atlanta, aided by the band’s friend Ed Rawls, a bartender at the nearby Drunken Unicorn, just around the corner from where fellow Atlantans Outkast work.


“Good Bad Not Evil is the record where naysayers, disinterested friends and acquaintances, and anyone else within earshot has to sit up, shut up, and listen.” —Pitchfork

“As grimy as a truck-stop restroom, Atlanta's Black Lips want to be the Pabst-swilling heirs to the Troggs. A-” —Entertainment Weekly.

A1 I Saw A Ghost (Lean)
A2 O Katrina!
A3 Veni Vidi Vici
A4 It Feels Alright
A5 Navajo
A6 Lock And Key
A7 How Do You Tell A Child That Someone Has Died
B1 Bad Kids
B2 Step Right Up
B3 Cold Hands
B4 Off The Block
B5 Slime And Oxygene
B6 Transcendental Light