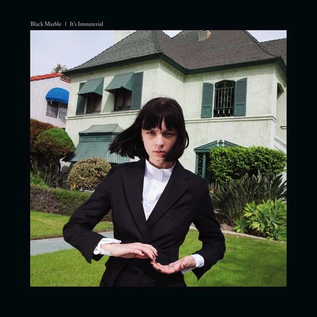 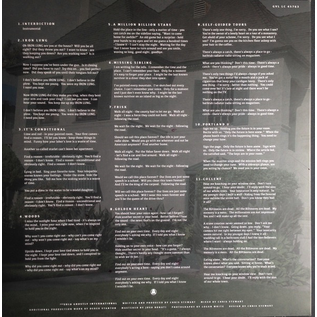 On 30 September, Black Marble will release their second full-length, It’s Immaterial.
Their first for Ghostly, It’s Immaterial follows up their EP Weight Against the Door
(Hardly Art/January 17, 2012) and highly acclaimed debut full-length A Dierent
Arrangement (Hardly Art/October 30, 2012). Still featuring Stewart at the helm along
with select collaborators as supplementation, the band’s recent shift in locale from
East Coast to West Coast lends a great deal to the overall feel of the new album.
The light and dark elements of shadows. The salt and sting of evening’s high tide
sea spray. The crunch of fallen leaves into the sweet stink of overheated orange
blossoms. A beautiful thing left on a shelf too high to maintain. The general mood is
that of creating something new, but going back in time to do it. Like attempting to
flesh out a song that you woke up humming but can’t find, because it doesn’t exist
yet.
With the end of the East Coast chapter of Stewart’s life on the horizon, It’s
Immaterial was recorded in a period of mental and physical transition. Trapped
between spaces and unable to move on until the snow globe flurry of ideas floating
around him settled just right, It’s Immaterial is soaring and muted all at once. A
collection of songs pieced together from perfect seeming snippets heard while
passing open doors. A framework in which your imagination creates its own specific
version of what you’ve been dying to hear but didn’t have a way to describe. That
song that was put on a mixtape for you and played over and over, but wasn’t
labeled, so never fully had or found.
With both early releases the band followed a familiar path stomped down in the late
70s and all throughout the 80s by bands whose sound and DIY ethics paved the
way for other likeminded artists with little formal training or funding to make their
own contributions to the genre. Pulling from the pre-“Simply Irresistible” days of
early Robert Palmer and first wave pioneers such as Silicon Teens, Iron Curtain,
Lives of Angels, and Solid Space, Black Marble dialed in on a clear understanding of
its own specific sound, showcased most clearly on this new release with Stewart
becoming more comfortable in being clear with what he’s trying to say, both
subjectively, in terms of the stories he’s telling and the things he’s willing to talk
about, and objectively in terms of the lyrics and upfront vocals, while still
experimenting with holding things back to produce a sound more claustrophobic
and immediate.
The first songs written for the album, “Frisk,” and “Woods” are good examples of
the nervous energy felt throughout. “Walk all night/the county had to let me
go/Walk all night/I was a force they could not hold,” Stewart sings at the opening of
“Frisk.” He closes the sentiment out with this line at the end of “Woods” - “Why did
you come right out/Why did you come right out/Why did you come right out/Say
what’s on my mind?
It’s Immaterial is musically different in terms of distance compared to A Dierent
Arrangement in the sense that where the songs featured on their debut full-length
seemed to hiss from a vent in the floor, the new tracks seem to be coming from the
next room. Written, recorded, mixed, and performed entirely by Stewart, the new
songs are the unified vision of one person’s attempt to patchwork together bits of
vapor, the most subtle gleanings of preference, and make one whole new thing
that’s an atmospheric continuation of its parts. An endless drive in the passenger
seat of a car while listening to everything you’ve ever loved, but lasting only 40
minutes.