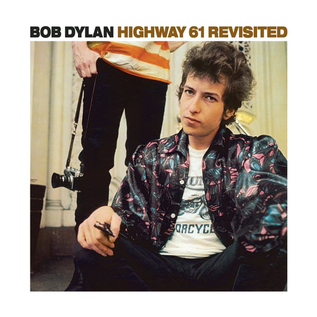 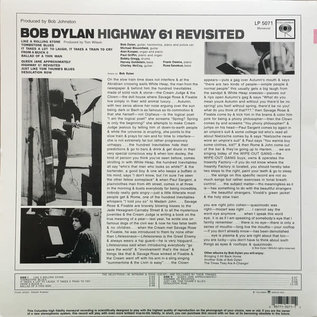 Man, the times were really changin' now. Having made half of Bringing It All Back Home with an electric band, Bob Dylan was now firmly committed to a new musical path. The shock and awe he experienced in response to his brief electric set at the Newport Folk Festival in July 1965 only strengthened his resolve. While this electrified journey was new, he chose to follow an old familiar route for inspiration. Since before he was born, Highway 61 had stretched from the Mississippi Delta up to the Canadian border, forming the infamous "crossroads" at Highway 49 in Clarksdale, Mississippi and running north through Minnesota, Dylan's home state. Its legend and mythology had captivated him from an early age, as he acknowledged, "Highway 61, the main thoroughfare of country blues, begins about where I began. I always felt like I'd started on it, always been on it and could go anywhere, even down into the deep Delta country. It was the same road, full of the same contradictions, the same one-horse towns, the same spiritual ancestors...It was my place in the universe, always felt like it was in my blood." No wonder then that he chose this long, winding road to revisit. Having returned from an exhausting UK tour in May 1965, Dylan was physically and mentally drained. He briefly considered retiring from the music business in disgust. Fortunately, the opening sessions for what would become Highway 61 Revisited turned him around. On July 15th and 16th, he returned to Columbia's Studio A in New York City to record a new composition, "Like a Rolling Stone." Its cascading, image-laden verses acted like a tonic, allowing Dylan to vent his visions and frustrations in one epic, six-minute-plus statement. No matter that it was over twice as long as the usual single of the day. It was such a brilliant, focused distillation of the current cultural zeitgeist that the normal rules didn't apply. The song's opening snare snap was like a cannon shot, brazenly fired over the bow of complacent society, destined to forever change it in ways that even its creator couldn't foresee. How did it feel? If you were one of the Dylan faithful, it felt absolutely great. Yet, internal company resistance to its lengthy running time and raw, unfettered sound conspired to delay the single's release. The sales and marketing departments were particularly vocal in their disapproval. However, an enterprising employee named Shaun Considine spirited out a demo copy of the song and took it to a New York discotheque named Arthur to give it a test spin for an unbiased audience. The crowd response was immediate and they demanded so many repeat plays that the demo eventually wore out. The next morning, a disc jockey and program director of two of NYC's biggest radio stations called Columbia to demand airplay copies, abruptly ending the internal company boycott. "Like a Rolling Stone" went on to become Dylan's biggest hit to date, peaking at #2 on the Billboard Hot 100, just beneath the Beatles' "Help." Well played, Mr. Considine. As rapturous as that single was, Highway 61 Revisited had much more to offer than just one stellar song. Reflecting the album's title, blues runs as a thread throughout the LP's framework, both in song titles like "Tombstone Blues" and in the unrelenting, charging chord structure of "Like a Buick 6." Speaking of the album title, Dylan had to battle Columbia on that point as well. When he submitted it, they were nonplussed, as he explained: "I wanted to call that album Highway 61 Revisited. Nobody understood it. I had to go up the f**king ladder until finally the word came down and said: 'Let him call it what he wants to call it'." The battles over the title and single, as well as his new electric approach, only seemed to embolden him. In turn, his passion inspired fiery performances from the session musicians, especially in the organ work of Al Kooper and the stinging guitar leads of Mike Bloomfield. On the album's one acoustic cut, the epic "Desolation Row," an impromptu studio visit by Nashville musician Charlie McCoy led to him playing second acoustic guitar with Dylan on the song. This initial meeting would yield major dividends on Dylan's next triumphant album, Blonde on Blonde. Sundazed Music is proud to present this seminal album in its rare mono form. It has been sourced directly from the original Columbia analog mono masters to provide a superior listening experience.