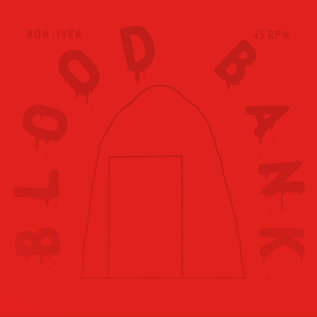 Bon Iver's Blood Bank EP was originally released in early 2009, hot on the heels of the beloved album 'For Emma, Forever Ago'. The EP was a harbinger of a new sound for Bon Iver: a movement away from the acoustic guitar-led instrumentation of the debut and the beginning of an exploration into the experimental sounds that have evolved but defined Bon Iver ever since. The reissue of this seminal EP is coupled with brand new live renditions of all the EP tracks:
Blood Bank, recorded at Ericsson Globe in Stockholm, Sweden on Oct 31, 2018
Babys, recorded at Eventim Apollo Hammersmith in London on Mar 4, 2018
Beach Baby, recorded at the The Bomb Factory in Dallas, TX on Jan 23, 2018
Woods, recorded by La Blogothèque at Pitchfork Paris on Nov 3, 2018

A reflection on the Blood Bank EP by Ryan Matteson:
When I reflect on the songs that make up the Blood Bank EP, I am drawn to mantras, both musical and lyrical. The driving and pulsating rhythm of the title track is held steady by the repeated refrain, I know it well, before it eventually yields to a beautiful array of guitar distortion and noise.
These moments are significant through all four songs. When the steel guitar makes its entrance on “Beach Baby,” it's transportive. A blissful, breezy feeling sweeps into the room and that puts you within the moment. Close your eyes and you can feel it. “Babys” follows perfectly. A piano guides your mind to the new beginnings that come with the changing of seasons. The awareness of time passes and makes way for another day.
Then there's “Woods.” A flawless finale. Foreign and new. Not just a new direction but a new beginning entirely. A place where boundaries don't exist. It was a signal change of things to come, laying the groundwork for new collaborations. A decade later, the song says so much in just three lines. Most significant to me are the words, “I'm building a sill to slow down the time.” Time doesn't slow down, it races.