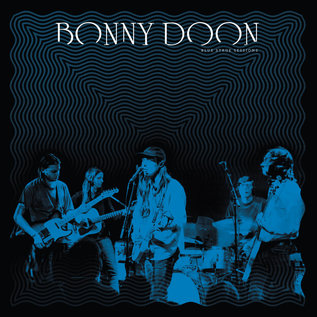 The Blue Stage Sessions, recorded on the Blue Stage venue at Third Man Records’ Detroit compound, takes the technology, ingenuity and magic that gave rise to the Blue Room in Nashville to founder Jack White’s hometown of Motor City. Like the Blue Room shows, these shows can be recorded in a number of methods, including direct to 2” analog tape as well as direct-to-acetate, a simple and undeviating recording process that allows for live tracks to be recorded direct to a master disc, which exclusively takes place at Third Man Records. Not every album can be recorded direct-to-acetate, but this Bonny Doon live album is one of the rare sessions, very dear to our hearts, that was.

Hailing from Detroit’s fertile music scene, Bonny Doon released their first songs into the world in 2015, followed by their well-received debut in 2017 and their more sparse, excellent second album Longwave in 2018. Bonny Doon’s music is founded upon an easy, ebbing groove overladen with dreamy texture, simultaneously serving assurance and inviting introspection. So, it’s no wonder they’ve been tapped by Waxahatchee to record and tour as the backing band supporting her new album this Spring.

For their live set, they hand-picked six of their most universally lovable tracks, spanning their two full-lengths, unhurried and deliberate. They were joined for select tracks by local music scene buddies including Tyvek’s Shells and Fred Thomas. The album opens with the tight album single “I Am Here (I Am Alive)”, showing just how precisely the group can replicate their studio sound while sprinkling in cheerful improvisation. The third and final song on the A side, “I See You”, finds Bonny Doon at their most lackadaisical, endearing and super- relatable, with lyrical depictions of life’s little and big, most profound and wonderfully ordinary. Especially in this time when comfort and consensus seem like rare commodities, Bonny Doon’s Blue Stage Sessions is a real gift.