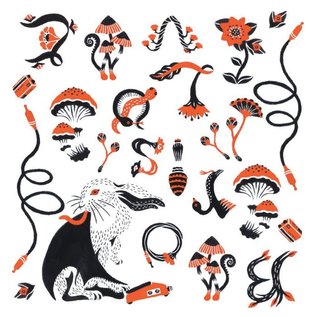 Formed in 1992, Boris boldly explores their own vision of heavy music, where words like “explosive” and “thunderous” barely do justice. Using overpowering soundscapes embellished with copious amounts of lighting and billowing smoke, Boris has shared with audiences across the planet an experience for all five sense in their concerts, earning legions of zealous fans along the way.

The next chapter in Japanese rock legends Boris’ story has arrived; their new double LP LφVE & EVφL is set for release on October 4, 2019 via Third Man Records. This double LP exists as two independent works, encapsulating conflicting connotations that interweave and become intricately entangled with one another, gradually eroding before becoming utterly singular. Continuing to tinker and toil with their sound since the 2017 release of DEAR, Boris have pivoted onward a more organic, non-grid literary style that LφVE & EVφL showcases.

In turns dynamic, drone, stoney, dreamy and beautiful, these albums contain multitudes. Album opener Away From You builds and compounds like a slowcore daydream fantasy, with the bassline gently mooring the song's buoyancy and employing high octave oscillating feedback as a quaternary bandmate. From there, we descend in a tremoring blaze into Coma and make first encounter with the pacific, jarring hysteria of EVOL. Both Uzume and LOVE play into one another, both full-volume immersive jams to blow your speakers and your mind. In The Pain(t), a carved out respite, washes like the sea into a pier. And at long last, Shadow Of Skull is a figmental 11 minute, 27 second whizzing, fuzzfest, providing a very gratifying ending to the double album journey . As heard here, Boris continues to propel their sonic palette into new mind-shreddy directions.