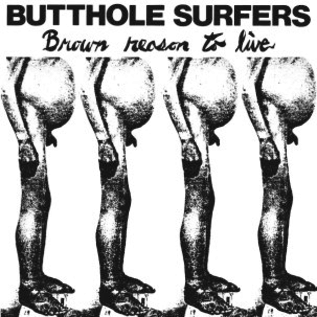 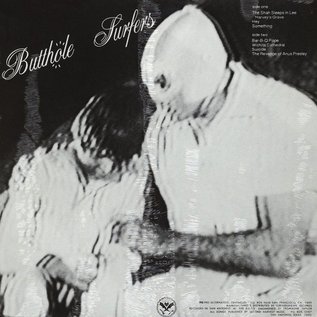 This is where it all began for these acid casualty reality trippers. Brown Reason To Live is their very first release; it came out in 1983. Here it is on vintage thick wax. 12" vinyl, 7-song ep- their first classic slab o' wax, and still as crazed and lysergic as ever!


"'I am the ultimate god!' followed by the sounds of a man nearly breaking down in tears- it's one of the most emotional and honest moments in rock history. Oddly enough it's at the end of a song called 'The Shah Sleeps in Lee Harvey's Grave' off of the superb Butthole Surfers debut EP 'Brown Reason To Live.' It's that accidental shift from extreme bravado to mournful regret that most bands only dream of pulling off, and it's all courtesy of some of America's most drug-addled pranksters. The following 6 tracks put experimental punk on the map. No one was quite sure what to make of it. Was it psychedelia, was it punk rock, or was it just crap? But everyone was certain that it was nothing like anything else. Insane, but not cheesy, lyrics that sounded passionate while the music sometimes grooved, rocked, irritated, or just became noise... this sounds brilliant. Drums that pound and words have the clarity required to catch such oddball lines as 'I got a stiff upper lip because I'm half dead' and 'they shot the pope's ass... and I feel good!" Kids, everyone, this is required listening. This is their peak..."