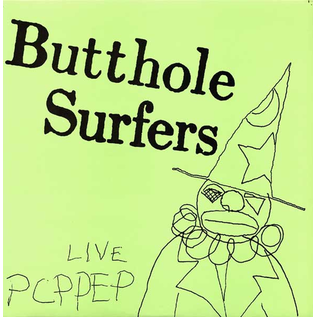 This is where it all began for the Butthole Surfers. The Live PCPPEP is their second release; it came out in 1984. Here it is on vintage thick wax; still as crazed and lysergic as ever!

The EP was recorded live in a bar in their hometown of San Antonio and released as a follow-up to their Brown Reason to Live 12". These acid-casualty reality trippers paid tribute to and killed American hardcore once and for all while single-handedly ushering in a new Post-Everything era. Many feel their two early EPs were the best records the band ever recorded.