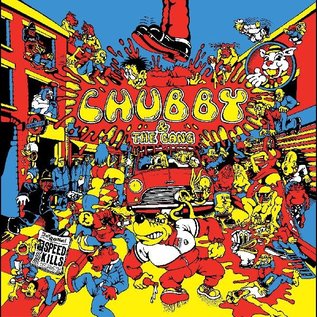 Speed Kills is the debut full length from London's loudest breakout band Chubby and the Gang. Beginning as a humble pipedream of West London electrician Charlie Manning, who spent years finding his way through the London punk and hardcore scene, the album is the manifestation of a musical mind marinating in hard punk, pub rock, blues, and doo-wop. From the sneering eternity of "All Along the Uxbridge Road," to the Hammond Organ smeared "Bruce Grove Bullies" -- the songs will have you reaching for your London A to Z and trying your hardest not to spill your pint. Finding a new home on Partisan Records, Speed Kills has been remastered at West London’s Metropolis Studios and features a previously unreleased track “Union Dues”.

Tracklist
A1 Chubby And The Gang Rule Ok?
A2 Pariah Radio
A3 All Along The Uxbridge Road
A4 Speed Kills
A5 Can't Tell Me Nothing
A6 Trouble (You Were Always On My Mind)
B1 The Rise And Fall Of The Gang
B2 Hold Your Breath
B3 Moscow
B4 Bruce Grove Bullies
B5 Blue Ain't My Colour
B6 Grenfell Forever
B7 Union Dues
Companies, etc.