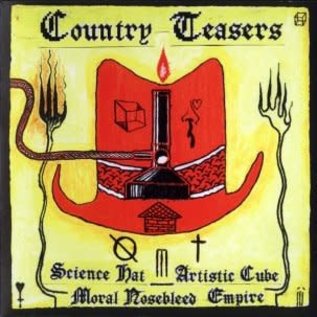 The COUNTRY TEASERS are best known for their stunning output on the Crypt and Fat Possum labels. How a band of Scots and Londoners crazily influenced by the likes of The Fall, Joy Division, Devo, Bauhaus, hip hop and country & western music wound up recording for labels best known for American rootsy-down-home-style output is anyone's guess. But here they are again with their most expansive and eclectic endeavor to date.


Science Hat Artistic Cube Moral Nosebleed Empire collects obscure singles, demos, outtakes and home recordings spanning the band's seven-year existence. 'Teasers front man Ben Wallers painstakingly pored through nearly twenty hours of material to find the best forty selections for the vinyl, and twenty for the CD, the concept being that each set of ten tracks represents a complete album. All together: "huh?" Wallers insists the double-vinyl set is actually four albums—pressed in an edition of one-thousand in a beautiful color gatefold jacket, by the way—and the compact disc, with twenty tracks extracted from that collection, is actually two albums.

Science Hat Artistic Cube Moral Nosebleed Empire offers the broadest range of the Country Teasers' styles, from the most savagely raw post-punk stomps to experimental electronic blow-outs. This collection is absolute proof that the Country Teasers are one of the most original bands around today.

A1 Getaway!
A2 I Get Hard
A3 I'm A New Person, Ma'am
A4 We Had To Tear This Motherfucker Up
A5 Kill!
A6 $4.99
A7 Happy Feet
A8 No Limits
A9 Loose Tongues Get Into Tight Places
A10 Thank God I'm Gone
B1 Let's Have A Shambles
B2 After One Thing
B3 So Lonely
B4 Compressor
B5 Can't Sing
B6 Tights
B7 Go Down Mighty Devil
B8 Some Hole
B9 Postman Pak And His Lazy Black & White Cunts
B10 Kenny Malcolm On Smack
C1 Good Pair Of Hands
C2 Demon Eyes
C3 Trendy Mick Fleetwood's Fast Tail
C4 Son Of Treble Faced Man
C5 Only Whittlin'
C6 Hat On The Bed
C7 Julie Halard
C8 Only A Woman
C9 Sickening Lack
C10 Prettiest Slave On The Barge
C11 Retainer
D1 Mollusc In Country
D2 Tough Luck On Jock
D3 Treble Life #2
D4 The Last Bridge Of Spencer Smith
D5 Adam Wakes Up
D6 Small Shark In Tiny Pool
D7 Secrets In Welsh
D8 Prettiest Slave On The Barge (Reprise)