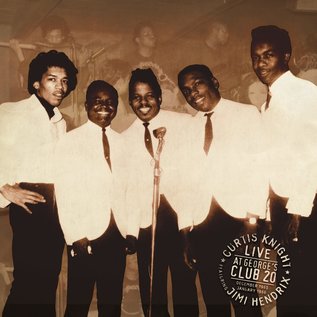 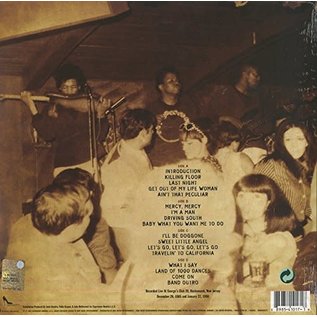 This is an entirely enjoyable record. Jimmy James with Curtis Knight, crudely recorded on the day after Christmas 1965 and on another date a few weeks later. These are rough and ready club performances featuring the band's take on blues and R&B favorites of the day. Most importantly Jimi sounds amazing! Playing what I take to be a cheaper Fender guitar and a Super Reverb amp, Jimi's sound is absolutely fantastic. The recording is rough but the instruments have a nice presence. I loved it.

New York area bandleader Curtis Knight met Jimi Hendrix, then known as Jimmy James, in October 1965 and recruited the budding guitarist for his pre-Squires band the Lovelights. At the cusp of turning 23, Hendrix was already somewhat of a veteran, having already toured and recorded with, among others, the Isley Brothers and Little Richard. These raw recordings, made at George’s Club 20 in Hackensack, NJ on December 26, 1965 and January 22, 1966, capture the Lovelights (filled out with bassist Ace Hall, drummer Ditto Edwards and saxophonist Lonnie Youngblood) tearing through popular rock and roll, soul and blues songs of the day. Even in these recordings, Jimi’s personality, stagecraft and humor are evident throughout. More so was his burgeoning skill as a guitarist.

Soon after Jimi Hendrix became a household name, these live Curtis Knight recordings began to surface on shoddily produced bootlegs. Longtime Hendrix recording engineer Eddie Kramer just recently restored the audio by removing all overdubs and effects, so fans can now hear what Chas Chandler did in that nightclub over a half century ago. Bernie Grundman mastered Live At George’s Club 20 1965 & 1966 for optimum audio fidelity.