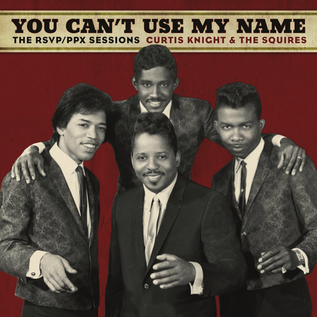 For decades, that arch enemy of the Hendrix Estate Ed Chalpin issued album after album of the recordings that he had rights to, with misleading album covers showing Jimi at the height of his fame. Thousands, millions of people were duped into buying albums with sub-standard material where Jimi's involvement had been that of a side-man or session musician. When news came that Experience Hendrix had aquired the rights to publish these same recordings themselves (on Sony Legacy) many/most Hendrix fans were horrified. After nearly 50 years and over 100 albums released which already featured these songs, Experience Hendrix published the Ed Chalpin RSVP/PPX tapes. Unreal. Note that Ed Chalpin passed away in 2019.

Bickering aside folks, this is an important part of Jimi's history and they have at least made a very good job of this. First off, Jimi's name isn't on the cover! At last, the presentation is correct, as these recordings are by Curtis Knight & The Squires! Also, the master tapes have been given a five star Eddie Kramer transfer and mixing treatment with a final Bernie Grundman mastering, so this disc blows away the multitude of previous releases of this material. However some tracks suffer from over-separation (guitar left, organ right, drums centre, etc...). I would have preferred a more central mix or even mono! Anyway, this sonic update gives the material a much deserved reappraisal. Forget the past 48 years and enjoy hearing JImmy emerge.
I haven't sat down and compared all of these to the previous releases because I only have a few old albums which I had bought cheap for research purposes. See my link below to the review at earlyhendrix.com for a thorough analysis. There were so many releases over the years of this material, with a mutitude of alternate mixes and versions, all mixed up with the 1967 sessions and the 1965 live tracks, which would follow soon after. Most of the material here does feature new mixes in relation to all the old PPX versions that have flooded the market since the late 60s.

So this album is for the most part made up of the studio recordings made in 1965 and 1966, with only "Gloomy Monday" from the reunion sessions of 1967. That is a logical inclusion as it is in the same R&B vein as the rest. This is in fact a previously unreleased take of that song (all previous releases featured a different take with post production overdubs). The track "You Can't Use My Name" is simply studio dialogue from that second '67 session (just before the band worked on "Gloomy Monday") where Jimi insists that Chalpin musn't use his name if the recordings made that day were put out*. So that is out of context really, in relation to all of the 65-66 recordings on this album (12 tracks!). Anyway, Jimi's wish has finally been granted and the album's title is a sarcastic jab at Ed Chalpin.
The band's singles "How Would You Feel"/"Welcome Home" and "Knock Yourself Out"/"Hornet' Nest" are included here of course detailed futher up.
"Gotta Have A New Dress"* and "Fool For You Baby" are pretty ordinary R&B songs but still featuring some nice guitar. "Don't Accuse Me" is a neat little blues with some great guitar from Jimi. The backing vocals seem more prominent here and I think I hear Jimi's voice in there. The spooky "Strange Things" is built on a basic Bo Diddley rhythm with again some great guitar. Knight's crazy laughter is thankfully mixed down here.

* Curtis Knight had released "Gotta Have A New Dress" in 1962 as a single on the Shell label. In 1965, he came back to the tapes, modified it and got Jimmy to put some extra guitar on it. The original can be found on YouTube.

The June 1966 instrumentals
The good news is the never before released (or heard on bootleg) instrumental "Station Break". It has a very Booker T & The MGs in feel and with "Hornet's Nest", "Knock Yourself Out" and "No Such Animal", that makes four Hendrix-penned instrumentals on this album! This is one of the reasons why this material deserves its place in the Hendrix discography. "Hornest's Nest" is in fact not the old single version but a never before released take.
"No Such Animal" didn't appear on the dozens of PPX exploitation albums and was only previously seen as a single in the 70s and then on the weak LP "Cosmic Turnaround" (which apart from that featured Lonnie Youngblood and fake Hendrix tracks). These instrumentals are all the more interesting as they highlight Jimi's soloing and rhythm chops in June 1966, just after Linda Keith came across him at The Cheetah Club (playing with either Carl Holmes or Knight's band). So they represent Hendrix just a few months before he recorded "Hey Joe" and a number of tracks for his first album in London. These versions of the instrumentals all clock-in at around 5 or 6 minutes and are perhaps longer than any of the previously released versions. A special mention for Marion Booker and his funky drumming which provides a very powerful drive for many of these recordings.

*Chalpin told a bare-faced lie of course and put the '67 recordings out on the albums "Get That Feeling" and "Flashing". Jimi and his management failed to stop Chalpin however and ended up owing him a Hendrix album (which turned out to be "Band Of Gypsys").

> Watch out vinyl fans, that version of the album is missing three songs "Simon Says", "Hornet's Nest", "You Don't Want Me" and the dialogue "You Can't Use My Name"