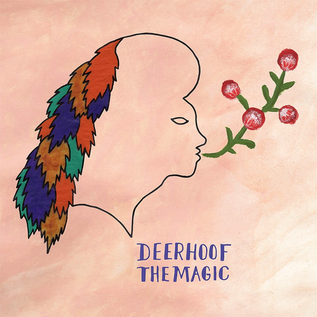 After all the accolades from press and peers, what’s a legendary band to do? Forget the recording studio, rent out an abandoned office space in the middle of the New Mexico desert, set up, plug in and play REALLY LOUD. Starting with hardly a notion of the outcome, by seven days later Deerhoof had found (you guessed it) The Magic: a raw and refreshing 15-song wallop of an album about what happens when you leave your comfort zone.

The version of Deerhoof you hear on The Magic is a most punch-drunk proposition. Everyone showed up in the mood to sing. Satomi, Greg, John and Ed dream up alchemies of punk, pop, glam, hair metal, doo-wop, hip hop, and R&B, late-night car rides, long days, attitude and spandex. Poetry into noise. Volume knob into gratification. Friendship into rock band.

The Magic is a mixtape imbued with Deerhoof's sorcery -- boldness, wonder, technical know-how, risk. It is a mixtape by the kid with the biggest music collection you've ever seen, who will take you camping and show you how to pull a rabbit out of a hat.

A1 The Devil And His Anarchic Surrealist Retinue
A2 Kafe Mania!
A3 That Ain't No Life To Me
A4 Life Is Suffering
A5 Criminals Of The Dream
A6 Model Behavior
B1 Learning To Apologize Effectively
B2 Dispossessor
B3 I Don't Want To Set The World On Fire
B4 Acceptance Speech
B5 Patrasche Come Back
B6 Debut
B7 Plastic Thrills
B8 Little Hollywood
B9 Nurse Me