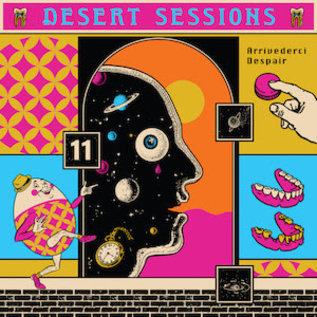 In 1997, Josh Homme (Queens of the Stone Age) and a handful of friends retreated to the desert of Joshua Tree, CA in order to isolate themselves from the distractions and comforts of their everyday lives. What began as a casual writing and recording session amongst friends has since become a project of legend. Spanning twelve volumes over the course of two decades, Desert Sessions has featured some of music’s most cherished icons stepping out of their comfort zones and collaborating with one another to create some of the most exciting music of their careers.
After nearly sixteen years since its last entry, the longest-running mix tape in existence, Desert Sessions will return this October with two stunning new volumes in its already storied catalog, Vols. 11 & 12, featuring collaborations from Billy Gibbons (ZZ Top), Les Claypool (Primus), Stella Mozgawa (Warpaint), Jake Shears (Scissor Sisters), Mike Kerr (Royal Blood), Carla Azar (Autolux, Jack White), Matt Sweeney (Chavez), David Catching (Co-founder of Rancho De La Luna studio), comedian Matt Berry (What We Do in the Shadows), Töôrnst Hülpft and new comer Libby Grace.