Destroy All Monsters ‎– What Do I Get / Nobody Knows 7"

Home / Destroy All Monsters ‎– What Do I Get / Nobody Knows 7" 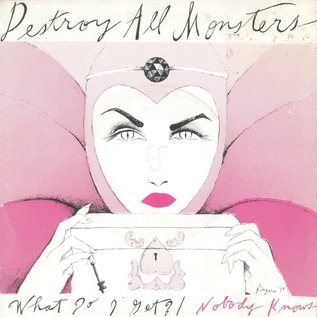 Destroy All Monsters began life as an experimental rock group in early '70s Ann Arbor, the brainchild of University Of Michigan art school weirdos Mike Kelley, Jim Shaw, and Niagara (Lynn Rovner), and filmmaker Cary Loren. Following many incarnations, lineup changes, and the breakup of Niagara and Loren's romantic relationship, the group solidified in the late '70s around Niagara on vocals, and Detroit legends Michael Davis of The MC5 on bass, and The Stooges' Ron Asheton on guitar. Though they never released a proper album, the group's singles are certified punk classics and the band has since achieved massive cult status, counting Sonic Youth among their legion of fans. Presented here is one of their first three singles. Color vinyl; Editions of 500.

A What Do I Get
B Nobody Knows