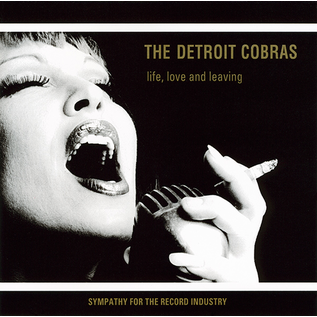 Continuing our commitment to shining a celebratory light on classic and influential music from Detroit, Third Man Records is honored to re-introduce the world to the undeniable importance of the Detroit Cobras.Here is one of two reissues of classic Detroit Cobras debut records — Mink, Rat or Rabbit and Life, Love and Leaving — on glorious black vinyl.

The band has experienced many roster revisions over the years, especially when it comes to their touring configuration, but founding members Greg Cartwright (Reigning Sound, The Oblivians), the perfectly irreverent Rachel Nagy on vocals and keys, and Mary Ramirez, one of the greatest guitarists to ever come out of Detroit, have been near constants and the creative force behind these two records and the Cobra musical legacy.

Originally released in 2001, the Detroit Cobras' Life, Love and Leaving is the group’s best-known effort, coming at a time when bands like the White Stripes and Dirtbombs were also releasing seminal albums that started picking up recognition outside of their collective hometown. Hitting hard with songs by soul heavyweights like Solomon Burke (“Stupidity”), Mary Wells (“Bye Bye Baby”), Otis Redding (“Shout Bamalama”), the inimitable vocals of Rachel Nagy would no-doubt be a template from which folk