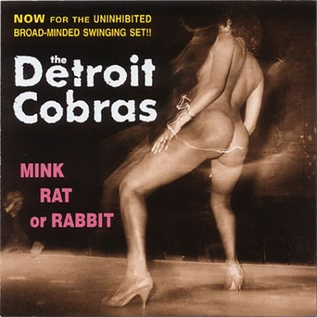 Continuing our commitment to shining a celebratory light on classic and influential music from Detroit, Third Man Records is honored to re-introduce the world to the undeniable importance of the Detroit Cobras.Here is one of two reissues of classic Detroit Cobras debut records — Mink, Rat or Rabbit and Life, Love and Leaving — on glorious black vinyl.

The band has experienced many roster revisions over the years, especially when it comes to their touring configuration, but the perfectly irreverent Rachel Nagy on vocals and Mary Ramirez, one of the greatest guitarists to ever come out of Detroit, have been near constants and the creative force behind these two records. The first of the two releases also include noted Detroit photographer Steve Shaw (The Fondas) on guitar, the prolific Jeff Meier (Rocket 455, Nathaniel Mayer) on bass, and the pure drum work by Damian Lang (Two Star Tabernacle) making for a line-up of pure perfection.

As one of the earliest salvos in the great Detroit garage explosion of the turn of the century, the Detroit Cobras' Mink, Rat or Rabbit (1998) is a landmark album. Comprised solely of covers songs (as has always been the band’s MO) the Cobra’s spirited takes on Motown classics (“I’ll Keep Holding On” originally by the Marvellettes), garage punk laments (“Bad Girl” originally known as “Bad Man” by the Oblivians) girl group tear-jerkers (“Easier to Cry” originally by the Shangri-Las) and New Orleans soul standards (“Break-a-way” originally by Irma Thomas) and the end result is nothing short of a staple that any record collection is empty without.