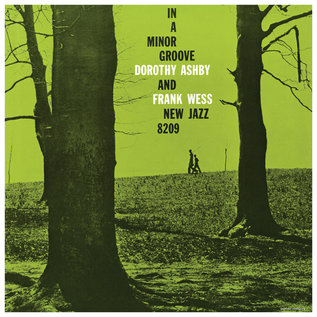 Dorothy Ashby was probably the greatest—and certainly the most swinging—jazz harpist of all time, re-purposing an instrument best known for ethereal glissandos into a fully versatile voice in combo settings, capable of providing both instrumental embroidery and rhythmic drive. But she was always fighting an uphill battle in terms of garnering critical and commercial success; both her gender and the exoticism of her instrument often prevented her from being taken seriously among the hidebound environs of late ‘50s and ‘60s jazz. But it is that very uniqueness of her sound and station in the jazz world that has made her one of the most collectible musicians of her era, as her music has been sampled and celebrated by modern-day hip hop and world music artists (e.g. Jurassic Five, Bonobo) alike. In a Minor Groove is one of two albums she made in 1958 with flautist/ saxophonist Frank Wess, and it is a marvel; backed by fellow Detroit native Herman Wright on bass and the great Roy Haynes on drums, she and Wess weave mesmerizing melodic threads through standards like “Alone Together” and “Yesterdays.” But perhaps the most amazing track is “Bohemia After Dark,” which displays Ashby’s uncanny ability to turn her harp into a rhythm guitar! For this first-ever domestic vinyl reissue of In a Minor Groove, we are using the original mono sources—not the rechanneled stereo and jumbled track listing that showed up on Prestige’s later repackaging called Dorothy Ashby Plays for Beautiful People—and pressing up a limited edition of 1000 in neon green vinyl! Original album art with Ira Gitler’s sleeve notes, too.