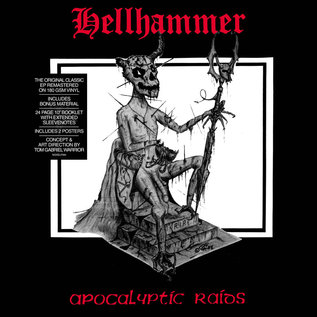 Hellhammer were a metal band from Switzerland that are credited as being pioneers of extreme metal and the black metal genre, along with Venom and Bathory, in the early 1980’s. Formed by Tom G Warrior and Martin Eric Ain (who went on to form Celtic Frost) ‘Apocalyptic Raids’ was originally released in 1984 and is a cult classic that is revered as a hugely influential release that laid the blueprint for extreme metal as a whole. The band never performed live while active but in 2019 Tom G Warrior formed ‘Triumph Of Death’ as a tribute to his former band and has been performing their music at festivals globally. -Concept and art direction by Tom G Warrior. -New sleeves notes and unseen photos. -Remastered by V.Santura (Triptykon). -LP version has two posters and 24 page book.