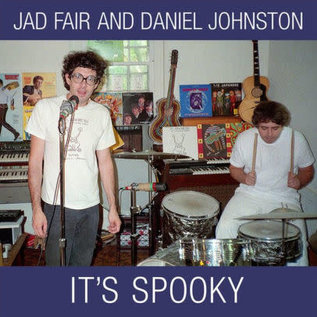 "I first heard Daniel in 1985.
Half Japanese had a show in Austin and Daniel’s manager Jeff Tartakov gave me a tape of "Hi How Are You?". I loved it and began corresponding with Jeff and Daniel. A few years later I was in NYC to take part in a recording session of Moe Tucker at Kramer’s studio Noise New York. Daniel was at the studio and he and I became friends. Daniel recorded two songs with lyrics I wrote. He recorded "Do It Right" for Moe's album, and "Some Things Last A Long Time" for his album "1990".
Soon after his time in NYC I invited him to my home and we had a week to record the songs for "It's Spooky". I considered Daniel to be a genius. I am so grateful to have had the opportunity to work with him. I’m so grateful to have it released again and it’s sounding better than ever thanks to an amazing mastering job by Kramer."
- Jad Fair

A1 It's Spooky
A2 Summertime
A3 I Met Roky Erickson
A4 Happy Talk
A5 McDonalds On The Brain
A6 I Did Acid With Caroline
A7 If I'd Only Known
A8 Tongues Wag In This Town
B1 Tomorrow Never Knows
B2 Oh Honey
B3 A Vow Of Love
B4 When Love Calls
B5 Frankenstein Vs. The World
B6 Hands Of Love
B7 Kicking The Dog
B8 What I've Seen
C1 Something's Got A Hold On Me
C2 Villian
C3 Chords Of Fame
C4 Ostrich
C5 Casper The Friendly Ghost
C6 First Day At Work
C7 Fun And Games
C8 Nothing Left
D1 Memphis Tennessee
D2 Come Back
D3 Tears Stupid Tears
D4 The Making Of The Album
D5 Get Yourself Together
D6 What The World Needs Now
D7 Sweet Loafed
D8 Ashes On The Ground
E1 I Live My Broken Dreams