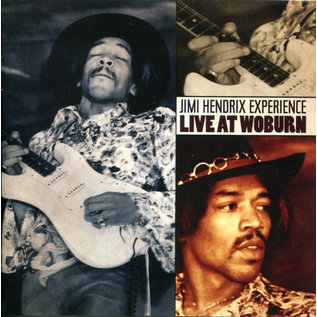 What a pleasant surprise it was to find this CD announced for release. Hendrix fans around the planet have been holding their breath in anticipation of the official release of the entire Albert Hall 69 concert and up pops this legendary, previously uncirculated concert recording. For decades, this was known to be in the possession of master Hendrix archivist and writer Caesar Glebeek, who held on to the tape, waiting to share it with us all when the copyright claim would expire (50 years after the artist's death). Then came the announcement that the tape had been sold at Christies to an unknown buyer. I had the impression that it was not Experience Hendrix but finally, here it is on Dagger. Many thanks to them for getting this to us so rapidly.

Through 1966 and 1967, The Jimi Hendrix Experience performed at around 165 British venues. From then on, Mike Jeffrey maintained bookings in the United States and its more lucrative stadium venues. This performance was important back in 1968 as it was the band's only UK date of that year. The following UK concerts were to be the February 1969 gigs at the Royal Albert Hall, London.

So here we are at one of the earliest rock festivals in Britain on July 6, 1968, the Woburn Music Festival in Bedfordshire, England. Also on the bill during the two day festival were John Mayall's Bluesbreakers, Alexis Korner, Geno Washington, Pentangle, Roy Harper, and the man who inspired Jimi to play "Hey Joe" back in 1966, Tim Rose ! The Experience were top of the bill for the Saturday evening show in front of 14,000 people. This came right in the middle of a "holiday period" for the band (as far as concerts were concerned). They had wound up their last tour with a gig at the Zurich Beat Monster Festival at the end of May and would not return to the gig circuit proper until the end of July. So this festival appearance does catch them a little out of their stride.

The performance was not professionally recorded but it is very good quality soundboard, despite the presence of a few technical glitches and buzzings at the beginning. Jimi and Noels' vocals are very clear and the guitars come over well. Only Mitch's cymbols lack sparkle. As was often the case with hastily prepared festival set-ups, the sound system sounds pretty disastrous at the beginning of the set. Jimi and Noel apologise for the technical hang-ups all the way through. Unfortunately, after famous D.J. Emperor Roscoe's introduction,"Sgt. Peppers" cuts in only 30 seconds from the end as the tape recorder was a little late in starting. "Fire" has a wonderfully furious beginning as if Jimi is forcibly challenging the dodgy P.A. system. To drown out the buzzing, he improvises heavily over the usual opening riffs. Great stuff.
"Tax Free" has some very nice wah-wah explorations from Jimi but the end of the song is missing. "Red House" is pretty unspectacular but interesting as always. At one point, Jimi slows it right down and settles into improvisation as if he were alone or in a small club. He gets very laid back until he brings it back for a rather hurried end."Foxy Lady" is on automatic pilot but with some great soloing before"Voodoo Chile (Slight Return)" chugs in rather hesitantly. This was a new addition to the set of course and the band don't seem to have it fully nailed down. Jimi seems to have tuning problems and the sound gets pretty muddy. Finally"Purple Haze" has a nice long feedback introduction, continues through the rough sounding P.A. and finishes with a very long tooth-picked solo, which was obviously a visual treat but doesn't satisfy on record.

So, not a "great" performance but a welcome addition to any hard-core fan's collection.

The Woburn Music Festival was one of Britain’s first large scale, open-air rock music events. Staged by brothers Richard “Rik” and John Gunnell, who were well respected individuals in the burgeoning London music scene where they were heavily involved in many aspects including band managed, show promoters and club owners. Rik in particular, who owned three fashionable 1960’s London nightspots—the Ram Jam Club, Flamingo, and Bag O’ Nails—presented authentic, first generation American icons like John Lee Hooker and Otis Redding and some of the brightest examples of a swelling wave of emerging British talent such as The Rolling Stones, Jack Bruce and Georgie Fame.