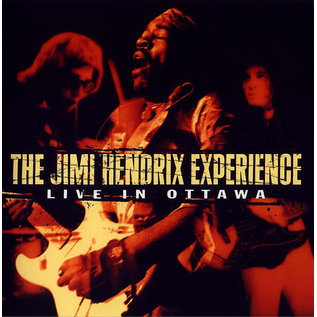 This time Dagger Records take us to a Canadien performance (March 19, 1968 - second show) recorded just five days after the Clark University gig already featured on a Dagger release. These very good quality soundboard tapes have circulated for years on bootlegs albums such as the aptly titled "Magic Fingers"(which sounded a bit speeded up).
This is a great show with The Experience in good spirits and playing well. There is a lot of tape hiss but the sound is nice and raw with Jimi's guitar right in your face. The mood is similar to that on "Stages 68" (Paris Olympia) finding Jimi bubbling with energy and humour, his playing rich with inventivity, despite the usual equipment hang-ups. At one stage Jimi treats us to his impersonation of Bill Cosby (he was in the audience that night). "Hey Joe" features the band's "1948 re-arrangement". The totally wild version of "Purple Haze" had appeared previously on the officially approved Univibes release "Calling Long Distance" released in the nineties. "Wild Thing" unfortunately cuts out early as the tape ran out (they should have left it off). Great version of "Tax Free" in there.
A helluva good JHE live album, this was nominated for a Grammy in the best "archive release" categorie! I kid you not.

> Note that this CD runs a little to fast! To compare, see the "Purple Haze" that was on the Univibes CD "Calling Long Distance" which was at the correct speed. Hopefully Experience will correct this error on day.

This unique, authorized 'bootleg' release features a raw, two-track mixing console recording of Jimi's March 19, 1968 concert in Ottawa, Canada. Jimi's appearance in Ottawa was part of an extensive US tour organized in support of his recently issued second album, Axis: Bold As Love.

There is much to be relished in this unpolished recording. Jimi's train whistle feedback announces his powerhouse rendition of Howlin' Wolf's "Killing Floor". A stinging "Red House", Jimi's own blues masterwork, is even stronger. Live In Ottawa also presents the earliest live version of "Tax Free" issued to date.