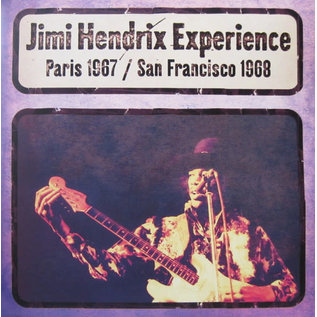 A nice surprise from Dagger Records with these fantastic soundboard recordings of The Experience on fine form.
The Paris 67 recordings are superb, the atmosphere being similar to the 1968 show of three months later (already released as "Stages 68") with Jimi in very good humour, cracking jokes, chatting to the audience and generally having a ball. Noel also chips in with humourous comments and he dedicates "Catfish Blues" to "the Faces", meaning The Small Faces who were in the audience with P.P. Arnold and Mama Cass ("P.P. Cass & The Small Arnolds" as he calls them at one point).
Two numbers from this 1967 gig were included on the 2000 box set:"The Wind Cries Mary" and "Catfish Blues" which faded out due to sound problems, spoiling the recording on the night. "Burning Of The Midnight Lamp" and "Foxy Lady" suffered the same fate and are also absent here. Those losses are more than compensated by another great "Rock Me Baby" (the only other live one released being from Monterey) and more importantly "Stone Free" (the only early Experience concert recording of the song released to date !). "Red House" was previously on "Live & Unreleased"/"Lifelines".

For the Fillmore gig Jimi apologises that the band don't have their own PA, but the sound captured on tape is just great and he is bubbling with musical ideas even though the performance is rather laclustre and plodding in parts. Jimi does sound tired out as he speaks over the microphone and even the audience seem half asleep. Incredibly, Mitch Mitchell leaves the drum seat to Buddy Miles who sits in for an instrumental cover of Traffic's "Dear Mr. Fantasy" (Buddy Miles Express were support band to The Experience around this time). So Jimi, Buddy and Noel take off for a fascinating free-form jam (which is unfortunately cut in half as the tape had to be changed in the middle !). A precious document. Tape length apparently also posed a problem for "Purple Haze", which cuts out just before the final crunch.The sixth release in the Dagger Records collection presents two impressive performances from Paris and San Francisco.

We begin in Paris at the famed Olympia Theater. These raw, direct to two-track live recordings made for French radio document the Experience’s triumphant return to Paris almost one year to the date of their 1966 showcase as a support act for Johnny Hallyday. By the time of their October 9, 1967 performance, the Experience had captivated Europe via Are You Experienced and such memorable singles as “Hey Joe” and “Purple Haze”. An exuberant, sold out house roared their approval throughout the evening.

This Paris performance came just eight days after sessions for what would become Axis: Bold As Love had resumed at London’s Olympic Studios on October 1, 1967. The Experience was in top form on this evening. Two superb examples of this spirited performance were included as part of the 2000 Jimi Hendrix Experience box set. “The Wind Cries Mary” and “Catfish Blues” made perfectly clear the appeal and historical value of these Paris radio recordings.
ADDITIONAL DETAILS
The Experience roared out of the gate with “Stone Free” and followed, much to the frenzied delight of the audience, with vibrant renditions of “Hey Joe” and “Fire.” Beyond the songs already set aside as part of the Jimi Hendrix Experience box set, two additional Paris performances have not been included on this release. Technical problems commenced during the latter half of “Catfish Blues” and a malfunctioning microphone rendered “Burning Of The Midnight Lamp” and “Foxey Lady” unusable. Thankfully, Jimi’s vocal microphone was restored just prior to the start of B.B. King’s “Rock Me Baby.” A compact “Red House” prefaced a grinding, muscular take of “Purple Haze.” Jimi then followed with “Wild Thing,” replete with incomprehensible feedback swoops and a rousing, tongue in cheek lead vocal that emphatically closed the show. From Paris we move to San Francisco and The Winterland Ballroom. In the interim, the Experience had completed Axis: Bold As Love and had come to San Francisco to kick off their US tour in support of the album. Impresario Bill Graham had booked the group to perform eight concerts over four consecutive nights. The Experience performed at the Fillmore Auditorium on February 1st while The Winterland Ballroom hosted the performances on the 2nd, 3rd and 4th. Each of the eight performances were sold out.

Sadly, none of Jimi’s San Francisco performances in February were professionally recorded. Eight months later, all six of the Experience’s October Winterland appearances were preserved on tape but no such plans had been set in place for these concerts. Fortunately, an amateur stereo recording drawn from the stage monitor soundboard provides us with another compelling chapter in Jimi’s rich legacy. This rough hewn, two-track recording documents Jimi’s second show on February 4th, the eighth and final performance of his four-night stand.

Bill Graham had organized an extraordinary roster of talent on this evening. The Experience topped a bill that included renowned blues guitarist Albert King and local favorites Big Brother & The Holding Company, fronted by Janis Joplin. Albert King was a favorite of Jimi’s. The left-handed blues giant wrenched stinging single notes from his trademark Gibson Flying V. Although King like Hendrix played a right-handed guitar flipped over, he did not restring the instrument, leaving the high E string at the top in reverse order. King had refined his distinctive guitar technique over years of performances in taverns, hardscrabble juke joints, and occasional package tours. By the time of this Winterla appearance, King was just beginning to enjoy wider critical and commercial success. The guitarist had been signed to Stax Records, the R&B based recording home for such popular artists as Otis Redding. His most recent album, Born Under A Bad Sign, had a marked influence on a younger generation of guitarists such as Eric Clapton whose group Cream covered the title track on their best selling Wheels Of Fire double album later that summer.