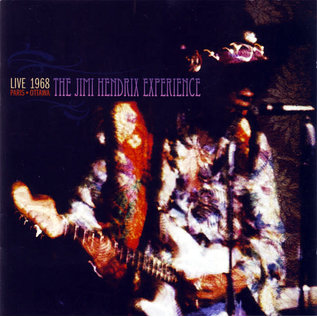 The Jimi Hendrix Experience: Live In Paris & Ottawa 1968 kicks off with a rousing performance at Paris, France’s famed L’Olympia Theatre. The January 29, 1968 performance marked the third time The Jimi Hendrix Experience had performed at the venue in just over a year; having first made their French debut as a support act with legendary French vocalist Johnny Halliday in October 1966.

Originally released as part of the 1991 4CD box set Stages, The Jimi Hendrix Experience’s L’Olympia Theatre performance makes it’s return engagement to CD for the first time in more than 15 years. Like all previous recordings in the Dagger Records library, Live In Paris & Ottawa 1968 is once again highlighted by posthumous studio engineering and mastering by our dynamic technical team of Eddie Kramer and George Marino.

At last a new Dagger Records release ! This is a great CD but we have already had most of it before ! Yes, that Olympia show is the same one that was in the "Stages" box set. That was of course an expensive purchase at the time so the recording was not that accessible. However, since the 90s, that recording has been in the shops many many times on unofficial labels (see list below) so its release on Dagger, which usually supplies us with genuine rarities and previously unheard of recordings, is rather surprising and very disappointing.

Those who do not already possess the show are in for a real treat however. The concert was recorded in early 1968 at the famous Paris Olympia Theatre where we find the Experience riding on a crest of a wave. The band are in such good humour on this clear mono recording, which captures the excitement of the European concerts of the epoch. It's a delight to hear Jimi in such a playful mood. Interesting that on "Red House" , Noel plays his bass parts on a six string guitar (borrowed off Kieth Richards backstage) just like on the original studio version (that track had appeared a year earlier on "Lifelines"). There is a rare live performance of "Drivin' South" also, which ends dramatically as Jimi creates the sound of a car screaming towards us. A great little show and what a set list !

The real event on this CD is the addition of three songs from the first set at Ottawa in 1968 (Dagger have of course already put out the second set, see further up). Extracts of the songs can be heard on the Authentic Hendrix site and they sound great. Only three songs however. Does this mean that this is all there is ? Here is the setlist for the first show (according to Ben Valkhoff's book "Eyewitness": Sgt. Pepper's Lonely Hearts Club Band, Fire, Foxy Lady, Red House, I Don't Live Today, Purple Haze, The Wind Cries Mary . Tony Brown's "Concert Files" does not mention the last two tracks there.

On Ebay recently, an ex Electric Lady Studios engineer offered for sale some copy tapes that he had made in 1975. The tapes had been authentified by Experience Hendrix who where following the sale, to make sure that the tapes remain simply collectors items. Exerpts of the recordings were on-line and they revealed that the content was essentially work-in-progress studio tracks, very similar to all the material now circulating as bootlegs. However, one track caught my ear. It was a version of "Little Wing" that has never surfaced in any form before. It sounded to me like a studio rehearsal at first. I informed the seller, who promptly withdrew the track from the sale in respect to his obligations to the Hendrix Estate. He was informed by John McDermott that the song in question was from the first show at Ottawa ! "Little Wing" has never been mentioned in archived set lists as being played during the first show. If that is the case, why isn't the track on this CD ? Is the song incomplete ? Does Jimi mess it up ? Perhaps this product was already in fabrication before they had the time to insert the song. Maybe one day the track will resurface and the mystery will be solved.

All in all, this will be a very good CD but let's hope that in future, Experience Handrix will feed us with much rarer recordings rather than use Dagger as an outlet for re-releases ("Jimi By Himself", "Stages 67", etc.,…).

Paris Olympia 68 previously on "Stages 68" and the following unofficial releases:
- "Astro Man" (Burning Airlines)
- "Live At Paris Olympia" (Radioactive)
- "Axis Bolder Than Love" (Purple Haze)
- "Live & Unleashed" (Rock Of Ages Export)
In addition to The Experience’s French performance, Live In Paris & Ottawa 1968 is rounded out with the inclusion of three previously unreleased live recordings of The Jimi Hendrix Experience performing in concert at the Capitol Theatre in Ottawa, Ontario, Canada. The three, previously unreleased songs represented here include The Beatles’ hit single “Sgt. Pepper’s Lonely Hearts Club Band” along with two classic Hendrix anthems including “Fire” and “Purple Haze.” These new recordings were taped during The Experience’s first show on the evening of March 19, 1968 and are sourced from a previously undiscovered tape.

Recordings from The Experience’s second show on March 19, 1968 in Ottawa was the subject of Dagger Records’ fourth release The Jimi Hendrix Experience: Live In Ottawa and combine nicely with this new release to round out any Hendrix fan’s music library.