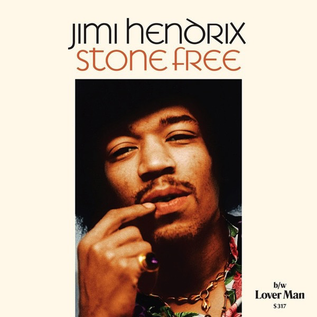 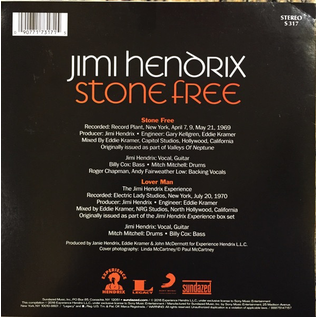 From Sundazed, the lost 1969 Jimi Hendrix single! Recorded in April, 1969, with key musicians from the guitar god's inner circle—Billy Cox on bass, Mitch Mitchell on drums, along with friends Roger Chapman and Andy Fairweather Low on backing vocals—this new platter features Hendrix' second studio attempt at "Stone Free," perhaps the song associated with him that best encapsulates the artist's restless renegade spirit! Reprise scheduled this axe anthem as a single not long after the sessions, but for reasons unknown, they issued an earlier version that was recorded in 1966 and had previously appeared as a 1966 B-side in the UK. This revised, rocking, razing take on a favorite song of the performers' (he often performed it in his shows) only later appeared on a posthumous LP in the '70s in an overdubbed version...but it is restored to the original performances here on the new Sundazed 7" edition! Also included is "Lover Man," a killer, funkified blues track with Billy Cox on bass and Mitch Mitchell on drums, recorded summer, 1970. A tight and tempestuous groove that could've (and should've!) been an A-side of its own. Two sides of pure, original Jimi Hendrix in his prime, presented by Sundazed in partnership with Experience Hendrix, L.L.C., the fourth in the series of commemorative singles with a new picture sleeve, featuring unique and hard-to-find vintage performances!