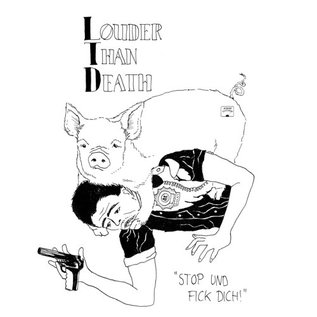 King Khan has scoured the earth to find the most rocking freaks of nature this side of the planet to form what he calls “an all-star cream of the crop rock ’n’ roll lifers association” aka Louder Than Death aka LTD—Looch Vibrato and Aggy Sonora (of the legendary Magnetix) on guitar and drums, and Fredovitch, the mighty organ surfer of the Shrines, throws out the keys and picks up the bass. King Khan assumes the position of frontman / lead shouter / effeminate cult leader (by choice). What is born is a maelstrom of pure unadulterated, unhinged, unbelievable rock ’n’ roll baptized in the salty sea water of Bordeaux, France, waterboarded with the finest wines, choked with the smelliest cheeses, dipped into a vat of oysters, octopus and shrimp. This is not just a band, its an orgy of the damned!
King Khan summons the punk rock demons buried in his bodacious brown back side, lathers up the listeners in his mystical oils and leaves the audience thirsty, horny, riled up, ready to dance upon the apocalypse and punch it in the face all in one mighty fell swoop. King Khan on the other players: “I once saw Looch Vibrato take a pair of glasses off someone’s face and stick them in his mouth and crunch them into dust, all because he warned him not to drink a warm can of beer filled with his own piss. Aggy Sonora, is the love child of Peggy from the Gories and Anaïs Nin. She beats her drums as senselessly as sensually. The sound of lust and labour rammed into one mystical inauguration of the pleasure dome. Fredovitch (aka Freddie Rococco) was once mistaken for the son of Roky Erickson by Japanese music magazines. He is in fact a son of a gun and the greatest bass player since sliced brie. When he isn’t playing bass he is conducting orchestras in his mind and preparing to take over the world of classical music. His motto is : you slap my bass, I’ll slap yo’ face... and fuck your mom.”
Tired of the smoke and mirrors of the modern music world? Then trust in this Union of Lifers. They chose the path to enlighten lives with simple, pure, decadent ordering of chaos. They found the beat in the slow death of the human race, and they have come to save your uncool niece.