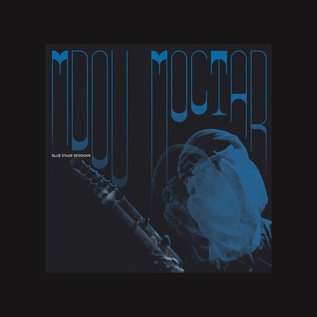 The Third Man Records Cass Corridor space in Detroit had the distinct pleasure of hosting and recording one of the most compelling new guitarists of the 21st century, Mdou Moctar. Mdou is a member of the Tuareg music community gestating in the remote desert city of Agadez, Niger, “where guitars are king.” His music first came to the attention of Western music-lovers through the essential field recording work being done by the good folks at Sahel Sounds, first on their 2010 compilation Music From Saharan Cellphones.

While much of Tuareg music has become more distorted, faster and bombastic as of late, Mdou’s soundscapes are more traditionally sparse, polyrhythmic and deeply psychedelic, with lyrics sung in the style of Tuareg nomadic poets.

His show on the Blue Stage at Third Man Records Cass Corridor was proof of how special all of this feels, especially in front of a Western audience, most of whom were seeing Mdou live for the first time. When Mdou took the stage with guitarist Ahmoudou Madassane and drummer Mahmoud Ahmed Jabra — only their faces exposed in their tunics and turbans — and began to play, there was a meditative intrigue that loomed heavy and thick in the room. Though hard to see clearly Mdou’s precise and rapid-fire fingerwork on his Fender, the audience was quickly and thoroughly transfixed by his left-handed virtuosity. By the end of the psychedelic-guitar-rock-groove-explosion that was their set, it was clear that this was a show that would be talked about for a very long time.