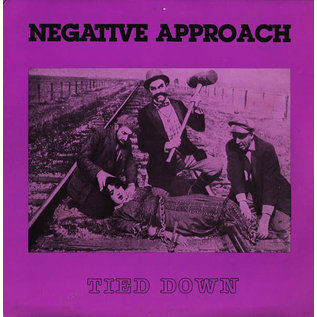 Born in 1981 in Detroit, MI, Negative Approach were the undisputed champs of Midwestern hardcore in the early to mid-’80s. Led by John Brannon’s hoarse wail, with OP Moore on drums and brothers Rob and Graham McCulloch playing guitar and bass respectively, the band concocted an extreme sound devoid of frills. This was first documented on their 10 Song 7” released on Touch and Go Records in 1982. The band released the more metallic-sounding Tied Down in 1983. After disbanding Negative Approach in 1985, John Brannon went on to form Laughing Hyenas.
For over three decades, Negative Approach’s minimalist and aggressive brand of punk has inspired countless hardcore bands around the globe. Their classic LP, Tied Down, is still considered paramount by most hardcore fans new and old.