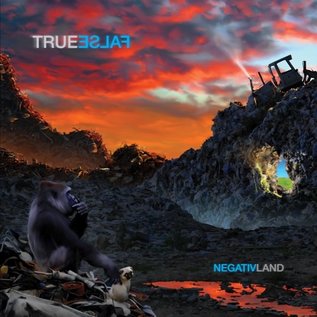 What is True False? True False is Negativland’s full length return to all original music that could be mistaken for actual songs, albeit ones sung by dozens of sampled vocalists who have never met. The first of two interconnected double albums, 2019’s True False tackles concerns that will be familiar to any surviving fans of the band: our nervous systems, our realities, and the evolving forms of media that inevitably insert themselves between us. Shootings, bees, the right’s rules for radicals, dogs pretending to be children, climate control, the oil we eat, and the right of every American to believe whatever they want to believe are all explored—it’s never the content, always the edit. This album is one’s own inescapable subjectivity made catchy as witness to the entrenched political beliefs of the left and right cleanly switching sides in under one generation, and it’s the first Negativland album to come with a lyric sheet. Juxtaposing Occupy mic-checks with US militia rallies, FOX news hosts and ecoterrorists, and the listener’s sanity with the home-viewing habits of Negativland’s lead vocalist, the Weatherman, when the word “true” is put next to the word “false,” a broader reality come into focus.

Who’s even in Negativland these days? Didn’t half of them die a few years ago? For this album, the band consists of Mark Hosler, David Wills, Peter Conheim, Jon Leidecker, as well as our dearly departed Don Joyce, Richard Lyons and Ian Allen. Containing tapes from the earliest years of the band (including dozens of samples that will be very familiar to regular listeners of their radio program Over The Edge), the team began work in earnest in 2012, folding the decades on top of each other until they finally resembled all the feelings that tomorrow has for today.